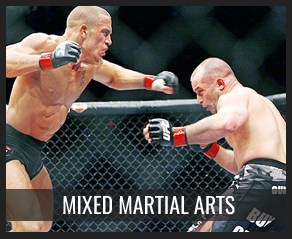 Here at the Minotaur Fight Store, we supply the latest MMA Gear from a range of brands such as Venum, Hayabusa, Tenacity Jaco, Bad Boy, Manto and more. Our MMA Gear and MMA Equipment is available in different colours and designs and ranges from Shin Guards, MMA Gloves, Headgear and more.

We also have a variety of MMA Apparel from the top MMA brands ranging from items like T-Shirts, Shorts, Joggers, Hoodies, Jackets, Tracksuits, Headwear and more.

Our MMA Shorts are also available, acting as a second skin, moving with you and giving no restrictions. Our MMA Shorts has compressive fibres to improve the blood circulation of our muscles to make your performances more efficient.

Mixed Martial Arts (MMA) dates all the way back to the Olympics in ancient Greece and originated as hand-to-hand combat performed as a sport called Pankration. There were only two rules back in Greece which was no biting and no eye-gouging. This was a very popular sport where Greek competitors became heroes and legends. Teachings of ancient Greek Pankration spread to India thanks to Alexander the Great. A Buddhist monk travelling through India soon picked up on aspects of Pankration and brought that knowledge to China where Asian Martial Arts like Kung Fu, Judo and Karate were born. As people branched into new lands over the years, they took these arts and developed them, which soon created new Martial Arts. For example, a Judo expert travelled the world and ended up in Brazil to share his knowledge and experience which soon led to the development of Brazilian Jiu-Jitsu.

Can’t find the  MMA Gear, MMA Apparel or MMA Equipment you are looking for? Contact us here.

GET NOTIFIED FIRST OF ALL NEW PRODUCTS AND EXCLUSIVE DISCOUNT CODES

REAL-TIME CHECK US OUT ON SOCIAL MEDIA

Receive the latest news from Minotaur.